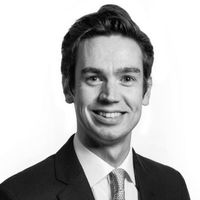 Sellers in M&A processes are looking for three things: value, speed and certainty.  At no point since the global financial crisis has deal certainty been under greater focus.

There is little doubt that M&A is becoming more uncertain, particularly cross-border, higher value and more complex deals.  That this instability is coming during a bull market for M&A – with deal value for the first half of the year second only to the first half of 2007 – makes it all the more noteworthy. 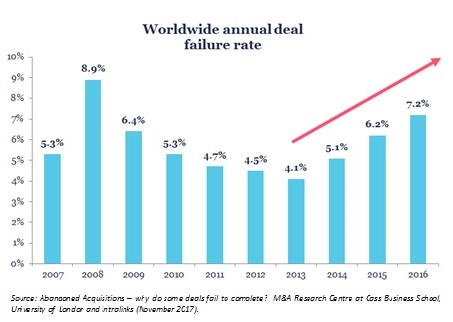 What is driving the uncertainty?

There is no single common reason for more deals to be failing once they have signed or announced.  A major driver for this uncertainty is governmental intervention, of one kind or another – and recent years have seen ever increasing application of foreign investment regimes, often in the name of protecting national interests but always with the end result being an ever greater number of deals being subject to review. Inextricably linked to these policies is the current political climate, with uncertainty stemming from Brexit in the UK and across the EU-27, the prospect of a trade war between the two economic superpowers and political upheavals in the Middle East. Deals are also being affected by public perception and the media’s role in shaping consensus.  While the media has always played its part in major transactions, its view is now seemingly inseparable from the regulatory process, with the ensuing risk of campaigns being driven by special interest groups or the whims of editors.

Why does it matter?

Deal certainty affects nearly all deals.  Some deals are simply not getting off the ground and others are having to adapt to take new risks into account.  For those deals which get as far as signing but then fail, the consequences inevitably involves wasted costs and lost time, often among senior management.  Executives are finding that they can personally take the toll – especially when a failure is associated with a particular individual, whether CEO or chair.  For listed companies, there is the added risk of the potential stigma and embarrassment linked to the collapse of a publicly-announced deal, made even more acute where there is a market perception of inadequate risk assessment or protection.  For a seller, you are left holding an asset the market knows you don’t want and which someone else has walked away from.

While some risk is inherent to participation in M&A, there are a number of tools which can be used – on both the buyside and the sellside – to reduce deal risk, and to have in place adequate protections for when the worst happens.  Sale documentation has had to evolve in order to reflect a more bespoke approach to risk sharing. Parties have had to recognise that it is not always possible to impose the strictest obligations on the buyer to achieve a particular clearance or condition.  Sophisticated parties are negotiating tailored solutions to risk sharing.

The pattern of regulatory tightening shows no sign of abating (see CFIUS and Export Control Reforms Have Arrived) and – despite some signals that the limits of regulator power is being reached (as was seen when AT&T challenged the US Department of Justice in its acquisition of Time Warner, although the DoJ is appealing) – the trend is set to continue.  To operate in this market with confidence, M&A participants will need to continue to find new ways to adapt to issues which largely remain outside of their control.  If you’re interested in hearing more about these risks and what can be done to address them, tune into to our Definitely Maybe podcast or get in touch with the team.

Sellers in M&A processes are looking for three things: value, speed and certainty. At no point since the global financial crisis has deal certainty been under greater focus. 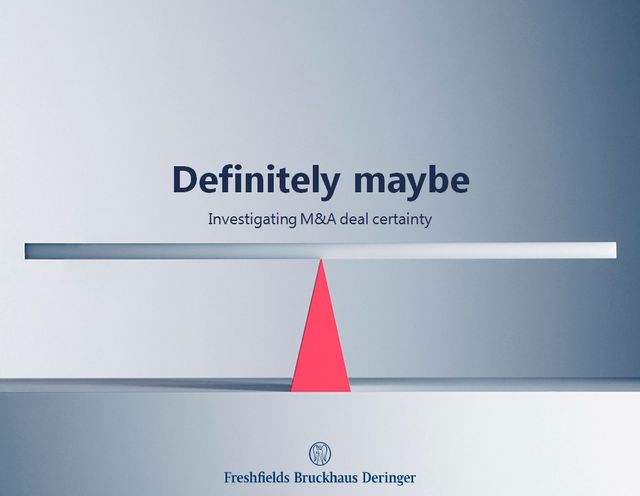