In Uralkali v Rowley and another [2020] EWHC 3442 (Ch), the High Court confirmed that it is unlikely that an officeholder would be found to owe a duty of care to participants in a sale process out of an insolvent estate. This is an important decision which will give officeholder’s considerable comfort that operating an administration or liquidation sale in the ordinary course is unlikely to expose them to risk of liability to a bidder for the way the process is run.

The case saw Uralkali, a bidder in the sale of the insolvent Force India Formula One team, level accusations of negligent misrepresentation and running a negligent bidding process against the administrators who had conducted the sale process. The Court set out the facts in a lengthy judgment, focused around the process run by the administrators which had sought to achieve either a rescue of the company as a going concern (via a share sale) or the sale of the business and assets of the company out of administration.

The Court examined each of the assertions carefully and in detail. In a nutshell, Uralkali claimed that during the course of the sale process, representations were made that value rather than deal structure would be the basis of the selection of the winning bidder, and further that the administrators were negligent in ultimately accepting a lower bid for the assets than Uralkali had put forward (the winning bid having been a rescue offer with a back-up asset purchase offer).

The Court thoroughly vindicated the administrators, finding first that the various representations asserted by Uralkali had in fact not been made, and second, deciding that it would be very unlikely for an administrator to assume a duty of care to a bidder (and that the administrators had not done so here), which is required on the Hedley Byrne v Heller principles to establish negligence in the ordinary course.

The Court has recognised that, in the context of an insolvency process which can be highly time-pressured and often fraught with complex commercial challenges, officeholders often need to be free to respond flexibly and informally to continue the momentum in the process. They should not be at risk of personal liability from doing so.

As the Judge stated: 'The task of administrators is demanding and exacting enough without requiring them to have to look over their shoulders for personal claims by bidders. I consider that the imposition of a personal duty of care on the administrators on facts such as the present would be inimical to the single-minded duty placed on administrators to act in the interests of the company’s creditors.'

As such, this decision will be welcomed as a statement of principle by officeholders, providing comfort that running a sales process in the ordinary course, should not open them up to personal liability.

If a duty of care was owed [in this case], it is hard to see why it should not be owed to bidders in most administrations 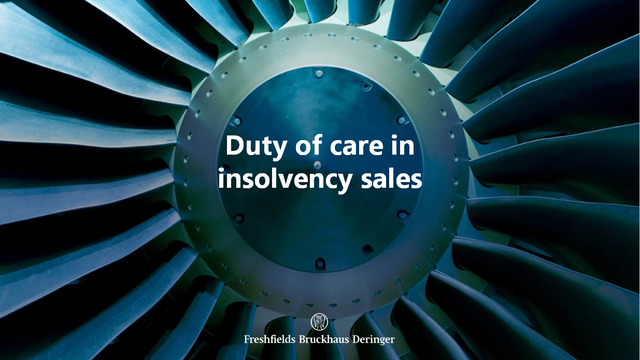